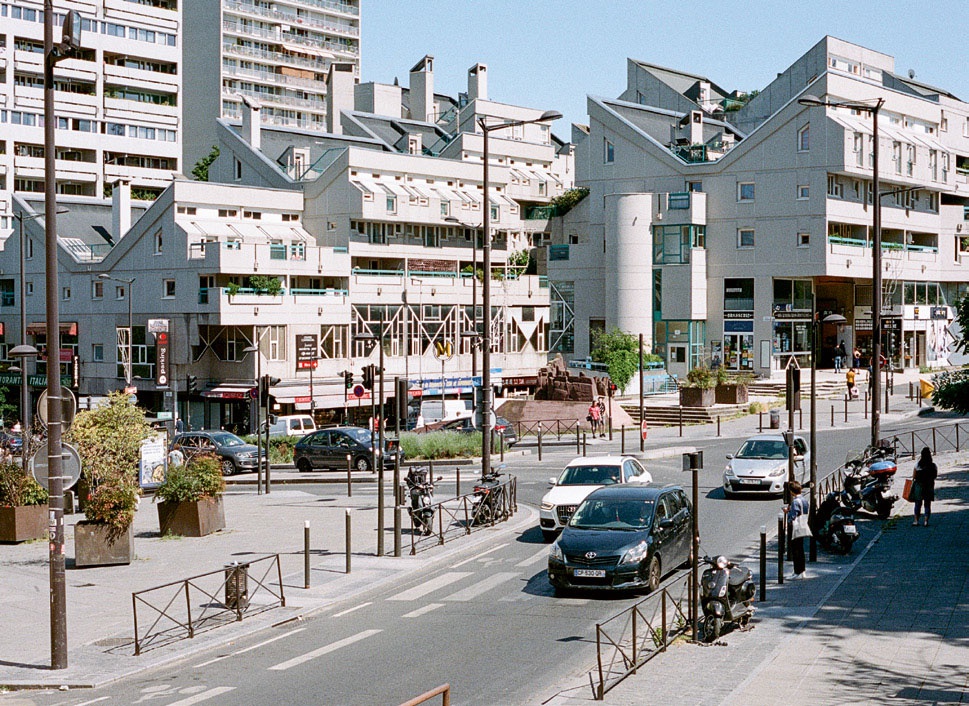 Social housing does not have to look schematic. A fact clearly demonstrated by a street junction in the centre of the Parisian suburb Ivry-sur-Seine. The architect Renée Gailhoustet, who was born in Algeria in 1929, rebuilt it over the course of two decades. Now an advanced age, she still lives in Le Liégat, the development she designed. The suburb governed for decades by the communists and the commissioner OPHLM (Oﬃce for the Promotion of Social Housing) provided a breeding ground for an experiment with a highly individual kind of social housing construction. Gailhoustet’s ﬁrst buildings already oﬀered an alternative to serial monotony. The high-rise blocks Raspail and Lénine have duplex apartments and communal areas on the roof. Her later buil-dings took an entirely new architectural and urban form: star-shaped ﬂoor plans, which are swivelled, cut, and layered to make an inha-bited and accessible “hill”. References such as Mont St. Michel or Matera can be invoked. These buildings emphasise the individuality of the residents and families and, despite the high density, create green outdoor spaces avai-lable for appropriation.
The work of architect Jean Renaudie is linked with Ivry and Renée Gailhoustet, as she awarded him several commissions – privately they were also a couple and had two daughters together, but always ran separate oﬃces. Gailhoustet’s later architecture was also inﬂuenced by his buildings on Avenue Casanova, popularly known as Les Etoiles, with their jagged ﬂoor plans. Free ﬂoor plans that grow from inside outside: the reﬂection of a social and cultivated societal ideal, where self-administration is lived and the person is at the centre. After ﬁfty years the experiment à la Gailhoustet and Renaudie and their emphasis on wide threshold spaces deserves a renovation. For some of the shops, several of which today stand empty, new ideas will have to be found. Why not in the manner of the conversion measures back then, i.e. by involving the residents? However, the centre of Ivry-sur-Seine oﬀers an ideal location for a situationist walk, away from tourist trails in Paris. — Jenny Keller, Roland Züger